The following article was published at the royalty forum Nobiliana.de 6 June 2006 and at the newsgroup alt.talk.royalty on 16 June 2006. This was before my blog was created so I have decided to re-publish the article here, with some minor corrections and additions.

Anne Michelle Lütken was born at Oslo kommunale kvinneklinikk, Josefines gate 30 in Oslo on Saturday 28 November 1959 as the first child of Carl Fredrik Lütken and his first wife Bjørg, née Christiansen. The birth announcement in Aftenposten 30 November 1959 No. 555, p. 10, only said:

According to VG of 29 November 2001, Anne grew up at Skillebekk in Oslo. She had a difficult relationship with her father, especially after he left her mother for another woman, and moved out and got her own apartment at Skillebekk only 16 years old. 2 years later she moved to Milan in Italy to study, was discovered by a photographer and started working as a model. She became more interested in partying than studying. At the time she became a model she had already tried amphetamine (speed) and later moved on to cocaine.

She met the Swedish tennis player Björn Borg who introduced her to another tennis player, Vitas Gerulaitas. They were an item for about a year. The abuse of cocaine continued. At a night club she met Baron Christian de Massy, son of Princess Antoinette of Monaco and nephew of Prince Rainier III. They married at Ramatuelle, St. Tropez on 11 September 1982. (*) The jetset life continued in Monaco, London, New York and France.

- We slept at daytime and partied all night long. Our life was alcohol, wild parties and shallow friends, Anne Lütken once said in an interview with Se og Hør. According to VG, they moved to New York in an effort to get away from their cocaine addiction. Christian de Massy served as Ambassador of Monaco for a while (can this really be true?) and represented the tiny principality on behalf of the Grimaldis.

But as Anne's addiction got worse, she moved home to Oslo, once again in an effort to get away. The marriage turned into a public conflict when the baron wrote in an advertisement in Aftenposten that he did not take any responsibility for his wife any longer, neither morally nor financially. But he claimed in a VG interview the day after that he still loved his wife. He returned home without Anne, and they got divorced in 1985.(**)

2 years earlier she had been charged on indictment for purchase of 7 g cocaine and 3 g amphetamine, but the case was later dropped.

She continued to make headlines. In 1990 she was in company with the Bergen man nicknamed «Hallik-Frank» («Frank the Pimp») when he fired shots against another dubious character, the «torpedo» (debt collector) Espen Lie. In 1999 her boyfriend, the Greek multi-billionaire Constantine Niarchos, died of an overdose of cocaine. Anne Lütken was in the same apartment when he died. After her friend's death she went public warning young people against the dangers of drugs. She planned to found a charity organisation to help out young girls who «had wandered from the straight and narrow».

Anne Lütken never got that far. On Sunday 25 November 2001, 3 days before her 42nd birthday, she was found lifeless in her luxury apartment at Phillimore Place in Kensington, London. According to her sister-in-law, Anne had got respiratory problems and died in her sleep. A friend attempted to resuscitate her, but to no avail. It shouldn't be too difficult to read between the lines and realize the real cause of death, but the result of the autopsy was as far as I know never published.

The sister-in-law described Anne as «a warm person» with lots of love for those close to her. «Even when her life was tough, she always had something to give others. Our children loved her dearly.» 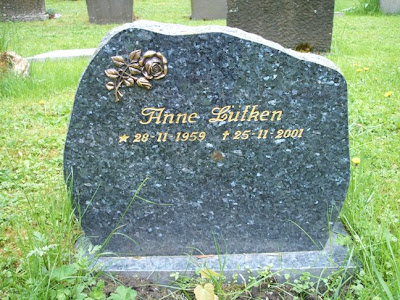 Photo taken in June 2006. Grave no. 20.059.09.11.
Lütken ancestry
According to the genealogical work «Slekten Lütken i Norge», 1997, by Helen, Ferdinand and Frances Lütken (editorial committee), the Lütken family probably originates in the Bremen area in Germany.

Johan Caspar Lütken, Anne's g-g-g-great-grandfather, was born in Hamburg on 19 April 1734 and died on 14 January 1798 at Østby gård (farm), Rakkestad, Smålenene (now county of Østfold). The names of his parents have not been established yet. He was married 3 times. His second wife was Daarthe Helene Paasche (1743-1781), daughter of Captain Christian Heidemarch Paasche, Rakkestad, by his wife Ellen Catharina Christensdatter Bjørnestad. They married in 1770.

Footnotes
(*) The sources I have collected don’t say whether Christian de Massy and Anne Lütken had both a civil and a religious wedding ceremony. But I know that the civil marriage took place at Ramatuelle on 11 September 1982 (Ramatuelle Marriage Certificate No. 16/1982).

(**) In VG’s article 4 July 1999, based on an interview with Anne Lütken, the divorce year is stated as 1987, as I wrote in my original article. However, according to the said marriage certificate, the divorce was granted at Monaco on 13 June 1985.