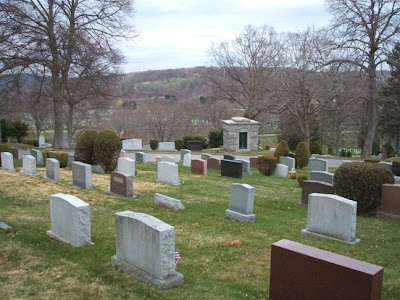 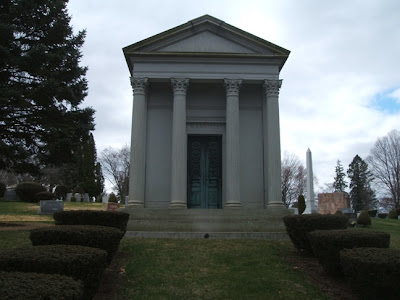 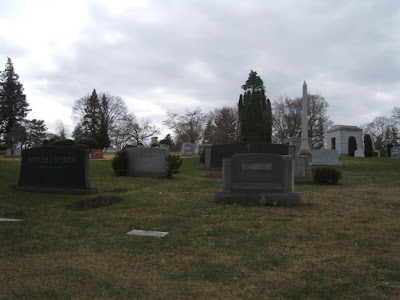 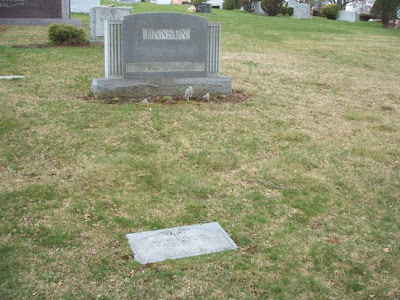 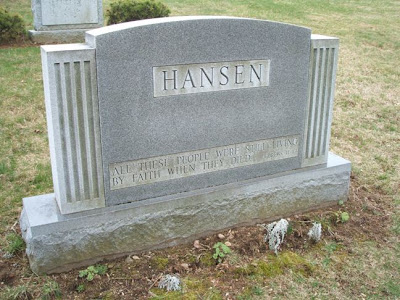 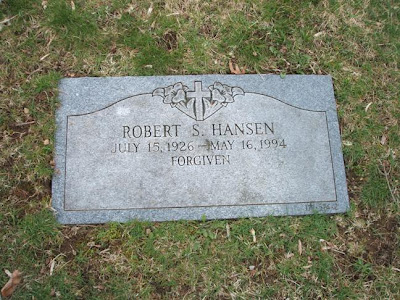 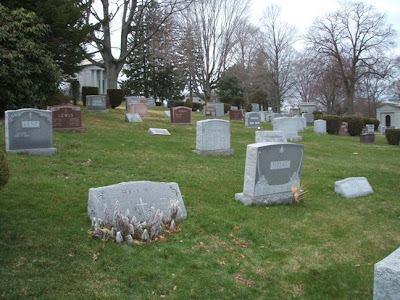 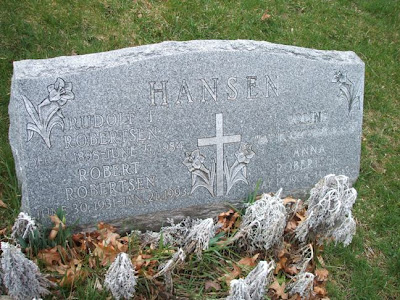 Grave (166/176-146) of Rudolf Robertsen (1898-1984), his wife Anna, née Johannessen (1904-1981) and their children Robert Robertsen (1931-1993) and Arline Hansen (1927-1967), the latter the first wife of Robert Hansen mentioned above. Rudolf, my wife's great-uncle, was born at Lillehavn in Spangereid (today Lindesnes municipality) as the fourth child of Tobias and Andrea Robertsen, while Anna was born in Farsund as the daughter of Johan Julius Johannessen, Farsund and Anna Bendiksdatter, Stavanger. See the Robertsen genealogy for more details.

During my last trip to the United States in April 2009 my wife and I visited family on both sides - some of my wife's Robertsen relatives in Brooklyn, New York as well as my Hoelseth and Ekeli relatives in Maryland.

Before heading for Maryland after having spent a few days in New York City, we decided to make a detour to Kensico Cemetery in Valhalla, Westchester County in New York, as I was working hard to finish the genealogy of the Robertsen family of Lillehavn, Lindesnes and wanted photos of the Robertsen grave to be included in the booklet. Unfortunately the photos didn't turn out so well in black-white and had to be taken out before the booklet went to print. But the photos were good enough to be published in this blog instead.

We visited the cemetery on a windy and cold April day, so we didn't spend too much time there. We found the Robertsen and Hansen graves after receiving directions from the cemetery office and then set off for Maryland.

The official website reveals that the cemetery is well worth visiting and deserves a longer stay than we had the opportunity for. There are many well-known people buried there, including several actors, composers and politicians as well as the Manhattan socialite Thomas F. Manville, Jr. (see photo no. 2 above and Findagrave.com) and Princess Irina Wolkonsky (1903-1969), daughter of the musician Sergei Rachmaninoff (1873-1943; see Kensico.org and Findagrave.com). Another list of "Notable burials" can be found at Wikipedia.

According to the official website, the Kensico cemetery was founded in 1889 when a 250-acre tract of farmland and hills was bought. The cemetery was expanded to 600 acres in 1905, but already 7 years later it was reduced to 412 acres when 130 acres were sold to Gate of Heaven Cemetery (which I think you can see in the background on the first photo above) in addition to 8 acres acquisited by the City of New York. Finding reasonably priced land near the railway was the key factor in the 1880s when the New York City cemeteries were becoming full. This means that you can get to Valhalla by train and then walk to the cemetery, which is only a few blocks away. But remember that the cemetery is large and that you will be easily tired if you want to spend a lot of time there.

When I visited the Kensico Cemetery back in 2009 I focused on my wife's Robertsen family and never thought about the Manville-Bernadotte connection, not even when I made the blog article... The name Estelle seems to have been a source of inspiration to Crown Princess Victoria when the name of her daughter Princess Estelle was decided.