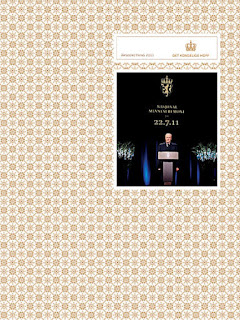 The Norwegian Royal Court's annual report 2011 was delivered to the Storting's Presidium, the Ministry of Government Administration, Reform and Church affairs and the Office of the Auditor General yesterday, 10 April 2012. I received my copy from the Communication Staff today. A pdf file of the report (in Norwegian only) can be found here. Earlier reports can be found here, while a summary in English of the 2010 annual report can be found here. I am sure 2011 will be covered later on.

The annual report contains a survey of the Norwegian royal family's activities and the work of the royal court in 2011. A list of all the orders and medals conferred during the year is also included.

The Lord Chamberlain, Åge B. Grutle, says in his summary that the tragic events at Utøya and the Government buildings on 22 July left a particular mark on the royal family's work in 2011. The royals made a point of being available to those affected by the tragedy and contributing to keeping Norway united around its values in such a difficult time.

The members of the royal house had a comprehensive programme both at home and abroad. They visited all the counties, including 42 municipalities (there were 430 in all during 2011, but the number dropped to 429 on 1 January 2012 when Mosvik and Inderøy merged), and 23 official visits were made abroad. Troms county up north hosted the king and queen's traditional county visit, while the Crown Prince couple went to Hedmark county.

The king and queen received state visits from Lithuania in April, from Luxembourg in May/June and from the Republic of South Africa in September. They paid state visits to Slovenia and Croatia in May and carried out a 10 days' long visit to the Norwegian America in October. Crown Prince Haakon and Crown Princess Mette-Marit paid an official visit to Ghana in April. The Crown Prince has continued his work as goodwill ambassador of United Nations Development Programme (UNDP), a role which brought him to Nepal together with the UNDP administrator Helen Clark in November. The Crown Princess has also continued her work for UNAIDS.

The royal diary of 2011 reveals that King Harald had 103 audiences as well as 28 formal audiences in which newly appointed ambassadors to Norway presented their credentials. The king had 241 official engagements in Norway and abroad, while the Crown Prince was present at 183 official events. For the other members the numbers were 99 (HM The Queen), 63 (HRH The Crown Princess), 23 (Princess Märtha Louise) and 26 (Princess Astrid Mrs. Ferner).

According to the annual list 30 persons received the Royal Norwegian Order of St. Olav in 2011, just like in 2010 (all classes combined). Among those were Grand Duke Henri of Luxembourg and Princess Astrid's husband Johan Martin Ferner. 124 persons received the Order of Merit (all classes combined). Among them were Luxembourg's foreign secretary Jean Asselborn and the former Olympic speed skating champion and President of the organisation Right to play Johan Olav Koss.

The Medal of St. Olav was given to only 2 persons, while there were 348 recipients of the King's Medal of Merit. Finally 28 persons received the King's commemorative medal, including the communication staff's own Sven Gj. Gjeruldsen.

See the official website for more details about the Norwegian orders and medals.