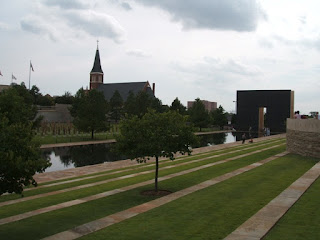 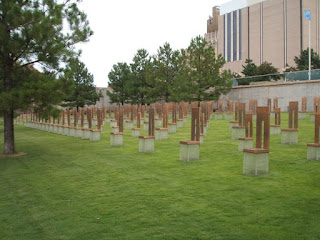 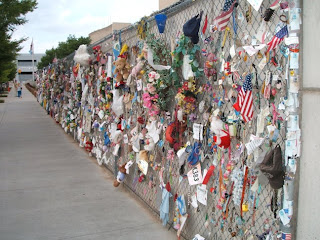 Yesterday I wrote about the proposed locations of the Norwegian national 22 July memorials. The proposals are - as expected - already debated, as many feel that the park next to the Oslo Cathedral would be a more fitting place for a national memorial in the capital. The cathedral was the natural place to visit for thousands of mourners in the days and weeks that followed the terror attacks. Who will forget the vast flower garden outside the cathedral? The steering committee wrote in its report that Domkirkeplassen (the Cathedral Square) still is a living, informal memorial place and didn't want to replace it with a permanent memorial. The national memorial place is supposed to unite everyone, independent of political or religious affilation. The steering committee felt that the square/park outside the cathedral would be too exluding.

Other people find that the Government Quarter, where the first terror attack took place, would be the best place for a national memorial. Others again think that Nisseberget in the Palace Park would be a good idea, while some people feel the location is rather "irrelevant" to the tragedy that took place in Oslo.

The discussion of the location and what the memorials should look like will of course continue. I am not going to compare the 22 July attacks with other terror attacks, as the story behind the different attacks are so different. Still, many thought about the Oklahoma City bombing in the days after the 22 July bomb attack, and it has also been mentioned during the trial.

The bomb attack on the Alfred P. Murrah Federal Building in Oklahoma City on 19 April 1995 killed 168 and injured more than 680 people besides destroying or damaging more than 300 buildings. I am sure there were many debates about the memorial in Oklahoma as well, something that I will not go into. The memorial was formally dedicated on 19 April 2000, while the museum opened the year after. I visited the Oklahoma City National Memorial & Museum in July 2005, and was very moved by the way the memorial was designed and by its simple beauty, if you can use that word about a place where such a horrible crime took place. The Reflecting Pool, the Feld of Empty Chairs symbolizing the 168 people who were killed, the Survivor's Wall and Tree and the Memorial Fence were all well-chosen parts of the memorial where the victims, survivors and rescue workers are honored.

The Norwegian national 22 July memorials will of course be different in style and size, but I wouldn't be surprised if the artists and/or architects who will work on the memorials in Norway will look to elements of memorials such like the one in Oklahoma City for ideas.