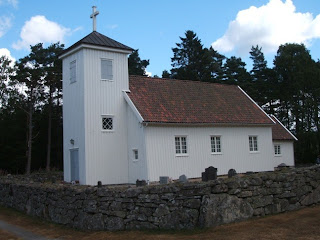 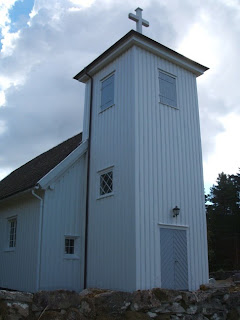 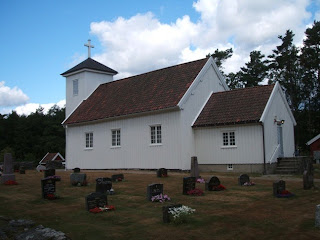 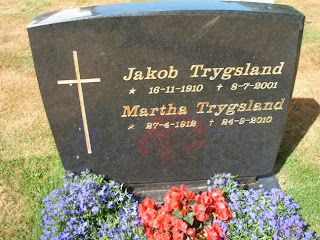 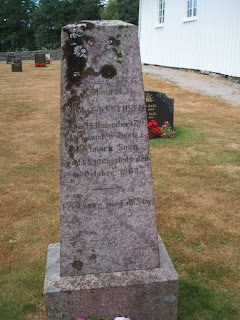 One of the oldest graves at the cemetery - shopkeeper Thomas Knuthsen, who was born at the farm Dosta in Harkmark 16 December 1786 and died the same place on 11 October 1863. 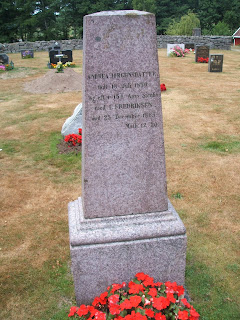 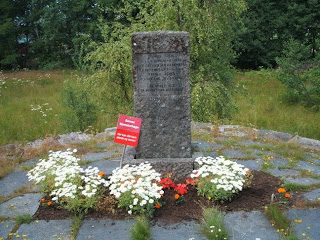 The war memorial outside the cemetery walls. Engraved are the names of Thomas Skeie (d. 6 March 1943, he was in the US Army), Alf Fredriksen Harkmark (died in the concentration camp of Natzweiler(-Struthof) 5 January 1944) and Tarald Osnes (died in Dachau 31 March 1945). The red sign, if anyone wonders, says "The children's flower garden. Here all children can plant and water [the flowers]." It seems to be a project for local pupils. I have seen similar signs at other cemeteries.

Harkmark Church in Mandal in the county of Vest-Agder, Norway, celebrates its 400th anniversary this year. I have visited the cemetery on several occasions, but this was the first time since my great-aunt died. The church, which has 135 seats, is protected by law. A book about the church in connection with the anniversary will be published later this year. For photos of the church inside, go to the official website of Mandal parish. The anniversary service will take place on 22 September 2013, to be conducted by the bishop of Agder and Telemark, Stein Reinertsen.
Posted by Dag T. Hoelseth at 21:35