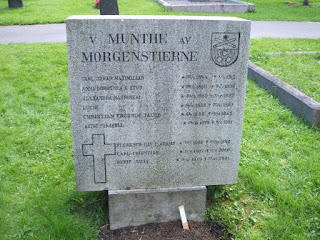 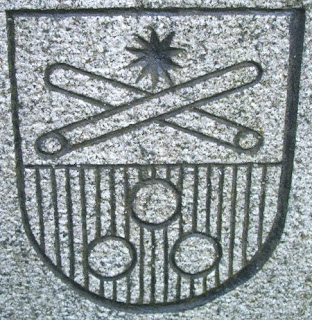 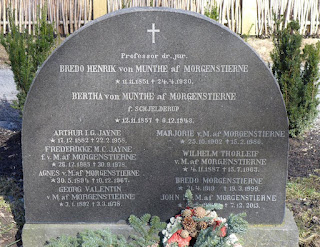 Bredo Munthe til Bekkeskov (1701–1757) was ennobled in 1755 with the name von Munthe af Morgenstierne. From him descends two Danish and one Norwegian lines. The second last edition of Danmarks Adels Aarbog, in which the family is included, divides the family into two lines, to which the children of Bredo's son Otto Christopher von Munthe af Morgenstierne (1735–1809) make three branches, while the descendants of Bredo's son Troels (1745–1810) make the fourth branch.

The privileges belonging to the noblity in Norway were abolished in 1821, but most families, including the von Munthe af Morgenstierne family, continued to live here, and many members have made a name for themselves in for instance diplomacy and academia.

The top photo shows one of the von Munthe af Morgenstierne graves at Our Saviour's Cemetery in Oslo, graves no. 01.061.02.024 and 025, which are leased together. The headstone includes among others Otto's great-grandson (of the first branch) Carl Johan Maximilian (1844–1912), who was born in St. Petersburg, Russia, and his wife Anna Dorothea, née Stub (1850–1936), who originally came from Bergen, Norway. Carl Johan Maximilian was the son of Christian Fredrik Jacob (1806–1886) in his first marriage to Princess Anastasia Sergiewna Soltikov (1810–1853).

The second photo is a close-up of the family's coat-of-arms.