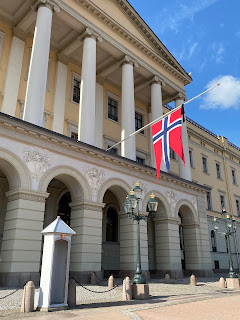 Upon his accession to the throne, it was confirmed that the new king would be known under his first given name Charles with the numerals III. By customary law his wife the former Duchess of Cornwall became Queen. This shouldn't come as a surprise to anyone after Queen Elizabeth on 6 February this year expressed her wish that «when that time comes, Camilla will be known as Queen Consort as she continues her own loyal service». When the official website was updated late yesterday, Camilla was styled as «Her Majesty The Queen Consort», although she is entitled to the style and title «HM The Queen» or more informally «HM Queen Camilla». The title «Queen Consort» is more description rather than a formal title, and she is perhaps referred to this way to avoid creating too much confusion so soon after Queen Elizabeth II, formally known as HM The Queen, died. I suspect that some time after funeral Camilla will be referred to as HM The Queen, just like the spouses of for instance King Edward VII, King George V and King George VI did. Of course, the description Queen Consort is to stress that she is the wife of the King, not the reigning Queen.

When Charles III became King, his titles Prince of Wales, Duke of Edinburgh and several other titles merged into the crown. It is expected King Charles' youngest brother, Prince Edward, the Earl of Wessex (and Forfar), will bestowed tht title Duke of Edinburgh some time later, as I commented on here in March 2019.

When King Charles III succeeded to the throne, his eldest son Prince William automatically became Duke of Cornwall, Duke of Rothesay, Earl of Carrick, Baron Renfrew, Lord of the Isles and Great Steward of Scotland. From earlier he had the titles Duke of Cambridge, Earl of Strathearn, and Baron Carrickfergus. This meant that yesterday Prince William was to be referred to by as HRH The Duke of Cornwall and Cambridge, his style and highest titles. His wife Catherine thus became HRH The Duchess of Cornwall and Cambridge, and their children were to be styled HRH Prince George, HRH Princess Charlotte and HRH Prince Louis of Cornwall and Cambridge. This turned out to be shortlived, as King Charles III in his speech tonight told that he had created his eldest son Prince of Wales (and, although not expressed, also Earl of Chester, which goes hand in hand with the title Prince of Wales). So we have to get used to a lot of changes in a very short time! I have to figure out which tags I should use for the new Prince of Wales. As of now he is to be tagged William Prince of Wales, while he until his wedding in 2001 was tagged Prince William of Wales. Prior to his accession, I used the tag «The Prince of Wales» for Charles, which obviously was not a very smart idea. I guess I have to figure out how to replace this tag with «Charles Prince of Wales». And yes, I know that one shouldn't use the personal name toghether with the title, but this is the only way to differentiate between the many Princes of Wales. Anyway, as William and Catherine are now HRH The Prince of Wales and HRH The Princess of Wales (and all the other titles mentioned), their children should be styled as HRH Prince George of Wales, HRH Princess Charlotte of Wales and HRH Prince Louis of Wales.

There will be no changes for TRH The Duke and Duchess of Sussex (Prince Harry and his wife Meghan, née Markle) and their children as of now. As explained among others by The Telegraph today, their children are now technically Prince and Princess (Prince Archie and Princess Lilibet of Sussex with the style Royal Highess), as stated by the Letters Patent of 1917. However, it was decided at the time of their birth that they should be known by their given name and surname Mountbatten-Windsor only (instead of Prince Harry's subsidiary title Earl of Dumbarton for Archie and Lady Lilibet Mountbatten-Windsor for Lili). I expect that the king some time in the near future will give a new Letters Patent to regulate a new title system for descendants of the monarch.

Tonight a memorial service (service of prayer of reflection) for the late Queen Elizabeth II took place in St. Paul's Cathedral in London.

King Charles III will be will be formally proclaimed at the Accession Council at 10 a.m. on Saturday 10 September in the State Apartments of St James's Palace, London. The proclamation will be televised. Besides the official website, see also the website of the Privy Council for more details.

I will try to follow up with details about and comments on the various ceremonies and other events that take place in the days prior to the state funeral. The date has not been given yet, but The Telegraph has suggested that the funeral will take place on Monday 19 September 2022.