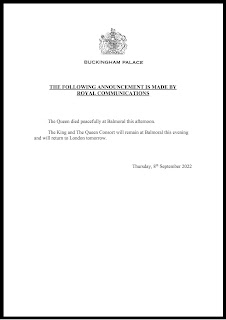 «The Queen died peacefully at Balmoral this afternoon.

The King and the Queen Consort will remain at Balmoral this evening and will return to London tomorrow.»

Later in the evening today Buckingham Palace issued the following statement from the new king: 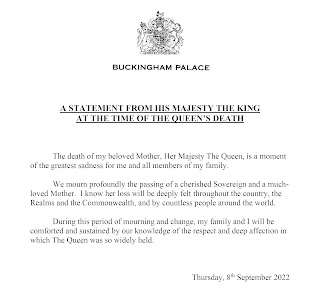 The death of my beloved Mother, Her Majesty The Queen, is a moment of the greatest sadness for me and all members of my family.

We mourn profoundly the passing of a cherished Sovereign and a much-loved Mother. I know her loss will be deeply felt throughout the country, the Realms and the Commonwealth, and by countless people around the world.

During this period of mourning and change, my family and I will be comforted and sustained by our knowledge of the respect and deep affection in which The Queen was so widely held.

It all happened so fast ...  Earlier today, Buckingham Palace informed that «Following further evaluation this morning, The Queen's doctors are concerned for Her Majesty's health and have recommended she remain under medical supervision. The Queen remains comfortable and at Balmoral.» Following the statement, the media informed us that the Queen's children and two daughter-in-laws – the then Prince of Wales and Duchess of Cornwall (Duke and Duchess of Rothesay in Scotland), the Princess Royal (Princess Anne), the duke of York (Prince Andrew) and the Earl and Countess of Wessex (Prince Edwad and Sophie) – as well as the Duke of Cambridge and the Duke of Sussex – all travelled to Balmoral to be at the Queen's side.

Two days ago Queen Elizabeth received the outgoing prime minister, Boris Johnson, in audience to accept his resignation and then Liz Truss to appoint her as the new prime minister. She was supposed to attend a meeting of the Princy Council yesterday to swear in the new prime minster as First Lord of the Treasury and to swear in those new members of the cabinet who were not already privy councillors, but the meeting was postponed on advice of her doctors, who said she needed to rest.

We have all observed her increasingly frail health for some time, and we knew that her death would come sooner rather than later, but still it is impossible to be really prepared for such sad news. The British nation is in mourning. I would like to express my sincere condolences to the British Royal Family and people. A reign of 70 – seventy – years has come to its end. As Prime minister Liz Truss said today: «Queen Elizabeth II was the rock on which modern Britain was built. [...] Through thick and thin, Queen Elizabeth II provided us with the stability and the strength that we needed. She was the very spirit of Great Britain – and that spirit will endure.»

The new king's title has been confirmed as Charles III. Prince William, who following his father's accession is no. 1 in the line of succession to the British throne, is now titled Duke of Cornwall and Cambridge.

At the moment I find it difficult to add anything of value to what has already been said by others, but will add a few links to obituaries which have been published today:

Queen Elizabeth II
The Royal Family is deeply saddened to receive the news that Her Majesty Queen Elizabeth II has passed away.
“Our thoughts are with His Majesty The King and the members of the Royal Family on the loss of Queen Elizabeth. For nearly a century, Her Majesty devoted her life to the service of the Commonwealth, following the British people through good days and bad, in times of happiness and sorrow. We also send our condolences to the British people.”
His Majesty King Harald

King Charles III will be proclaimed the nation’s new monarch at an Accession Council which will be convened at St James’s Palace in London tomorrow, Friday 9 September. Other details of ceremonies taking place in the next couple of weeks will be announced at the official website when it is up and going again. As of now we are – most understandably – only informed that «The official website of the Royal Family is temporarily unavailable while appropriate changes are made.»
Updated on Thursday 8 September 2022 at 23:58 (a couple of sentences added about the Queen's children and grandchildren travelling to Balmoral.), last time at Friday 8 April 2022 at 07.30 (corrected "Balmoral Palace" to Balmoral Palace" (a typical "think one thing and write something else" mistake ... Could have just written "Balmoral", though.)
Posted by Dag T. Hoelseth at 22:19