Queen Elizabeth II of the United Kingdom's death certificate was published today by the National Records of Scotland. 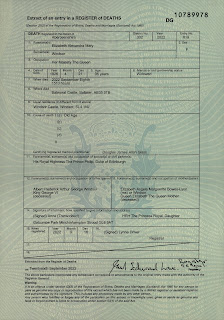 The National Records of Scotland writes on its website today: «The Registrar General for Scotland, Paul Lowe, confirmed that Her Majesty The Queen’s death was registered in Aberdeenshire on 16th September 2022. National Records of Scotland has today published an extract from Her Majesty The Queen’s entry in the Register of Deaths. An official extract of an entry in the Register of Deaths can also be referred to as a death certificate.»

The death certificate shows that Queen Elizabeth II died on 8 September 2022 at Balmoral Castle, Ballater in Scotland, and that the exact time of death was 3.10 p.m. The cause of death was given as «old age». The document shows that the certified registered medical practitioner was Douglas James Allan Glass, a local GP, and that the cetificate was signed by the Princess Royal (Princess Anne), who was listed as the informant, and the Registrar General for Scotland, Paul Edward Lowe.

We have earlier been informed that the then Prince Charles (the Prince of Wales) and the Princess Royal were the only children present when the queen died. The prime minister was informed of the queen's death at 4.30 p.m.