UK: The State Funeral and the Committal Service for Queen Elizabeth II

The State Funeral and the Committal Service for Queen Elizabeth II, who died on 8 September 2022, took place on Monday 19 September 2022. 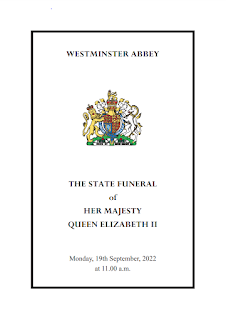 Screen shot of the order of service for the State Funeral. 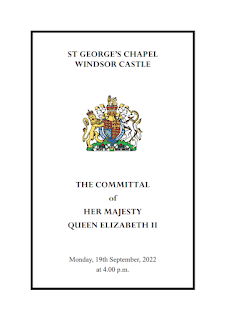 Screen shot of the order of service for the Committal of Queen Elizabeth II.

Three ceremonies took place on Monday - the State Funeral, the Committal Service and the internment service. The latter was private, and we don't know how many who actually attended it or who. But we know that around 2000 people attended the State Funeral.

The State Funeral Service at Westminster Abbey was attended by heads of state and overseas government representatives, including members of many foreign royal families, governors general and Realm prime ministers, as the official website describes it. Other representatives of the Realms and the Commonwealth, the Orders of Chivalry including recipients of the Victoria Cross and George Cross, government, parliament, devolved parliaments and assemblies, the church, and Queen Elizabeth's patronages formed the congregation, along with other public representatives.

The State Funeral service was conducted by the Dean of Westminster, David Michael Hoyle. During the Service, the Prime Minister, Liz Truss, and the Secretary General of the Commonwealth, Patricia Scotland, read lessons. The Archbishop of York, Stephen Cottrell, the Cardinal Archbishop of Westminster, Cardinal Vincent Nichols, the Moderator of the General Assembly of the Church of Scotland, Iain Greenshields, and the Free Churches Moderator, Helen Cameron, said prayers. The sermon was given by the Archbishop of Canterbury, who also gave the commendation. Finally the Dean of Westminster pronounced the blessing. The Order of Service can be read here.

The Committal service at St. George's Chapel at Windsor was supposed to take place at 4 p.m., but was delayed by at least 40 minutes. The King and Queen, other members of the British royal family and representatives of other royal families were in attendance, besides past and present members of The Queen’s Household, including members  from the private estates, as stated by the official website. Also in attendance were governors general and Realm prime ministers.
The service was conducted by the Dean of Windsor, David John Conner, with prayers said by the Rector of Sandringham, Paul Williams, the Minister of Crathie Kirk, Kenneth Mackenzie, and the Chaplain of Windsor Great Park, Martin Poll.
Prior to the final hymn, the Imperial state crown, the orb and the sceptre was removed from the Queen's coffin and placed on the altar. At the end of the final hymn, King Charles placed the Queen's Company Camp Colour of the Grenadier Guards on the coffin. At the same time, The Lord Chamberlain, the Lord Parker of Minsmere (Andrew David Parker), «broke» his Wand of Office and placed it on the coffin.
When the Queen's coffin was lowered into the Royal Vault, the Dean of Windsor said a psalm and the commendation before the Garter King of Arms, David Vines White, pronounced HM Quen Elizabeth II's styles and titles.
The Sovereign’s Piper, Paul Burns, played a Lament and the Archbishop of Canterbury pronounced the blessing. The national anthem was sung at the conclusion of the Service. The Order of Service can be read here.
It was a day I will remember for ever, and I am pleased that I decided to take the day off to witness the events of the day on TV. It was a most dignified fare well of a very much belowed sovereign. The services were simple and magnificent at the same time. All the people along the route from Westminster Abbey to Windsor Castle. The procession at the Long Walk heading up to Windsor ... the removal of the crown, the orb and the sceptre from the coffin was very moving, as was listening to the national anthem being sung at the end of the service.

A summary of the services can be read from the Court Circular 19 September 2022:

The Coffin bearing The late Queen Elizabeth II was conveyed from Westminster Hall on the State Gun Carriage of the Royal Navy this morning, drawn by Naval Ratings, and flanked by His Majesty's Body Guard of the Honourable Corps of Gentlemen at Arms, The King's Body Guard of the Yeomen of the Guard and The King's Body Guard for Scotland (the Royal Company of Archers), followed by The King, The Prince of Wales, The Duke of Sussex, The Duke of York, The Earl of Wessex, The Princess Royal, The Duke of Gloucester, the Earl of Snowdon and Vice Admiral Sir Tim Laurence and thence to Westminster Abbey.

The Lord Great Chamberlain, the Earl Marshal, the Lord Speaker and Speaker witnessed the departure of the Coffin bearing Her late Majesty from the Palace of Westminster.

The State Funeral of The late Queen Elizabeth II was held in Westminster Abbey today at 11 o'clock.

The Imperial State Crown, the Orb and the Sceptre surmounted the Coffin of Her late Majesty.

Members of Foreign Royal Families and other Dignitaries, the Doyen of the Diplomatic Corps and Senior High Commissioners, Heads of Mission and other Foreign Representatives attended.

The Dean of Westminster conducted the Service and pronounced the Blessing.

The Archbishop of Canterbury preached the Sermon and offered the Commendatory Prayer.

The King's Guard was turned out with the State Colour on the Forecourt of Buckingham Palace.

A Guard of Honour found by the Royal Navy, the Army and the Royal Air Force, with the Band of the Royal Marines was formed up in Parliament Square.

After the Service the Coffin bearing The late Queen Elizabeth II was conveyed from Westminster Abbey on the State Gun Carriage to Wellington Arch, Hyde Park Corner.

The Coffin bearing Her late Majesty was transferred from the State Gun Carriage to the State Hearse and thence to Windsor Castle.

The Members of the Royal Family were present.

It has not been easy to compile a survey of people who attended the State Funeral at Westminster Abbey and/or the Committal Service at the St. Georges's Chapel at Windsor. I watched both events, but the cameras didn't focus much on the foreign royal families and other dignitaries. I have taken most names from various newspapers, including The Telegraph and The Guardian, but have also depended on Wikipedia and contributions on the website Nobiliana.de as well as on Twitter from Arabian Royal Agency, Rodrigo, Lucas Szkopinski and Netty Leistra (Netty Royal) among others. Some only attended the state funeral, others only the committal service, while others again, like Crown Prince Hussein of Jordan only attended the reception at Buckingham Palace the day before the funeral. I have tried to focus on the royals and royal relations, but have also included some of the dignitaries, mainly from the Commonwealth and from Europe. Most of the list consist of attendees at the State Funeral, I should add. I am sure there are mistakes and important omissions - please tell if I have mentioned some who were not present. Not all the media reports have been accurate.

The British Royal Family (and relatives)

Royal and princely houses outside Europe

A selection of other dignitaries