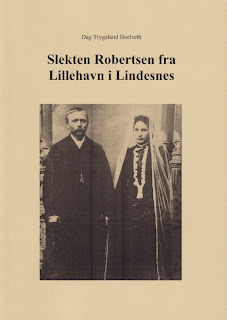 The booklet "Slekten Robertsen fra Lillehavn i Lindesnes" ("The Robertsen family from Lillehavn in Lindesnes") was published last week in connection with the family reunion at Spangereid grendehus (community centre).

Every family has a story to tell. This is the story about a fisherman's family from Lillehavn at Spangereid parish in today's Lindesnes municipality in the very south of Norway.

The booklet is divided into two main parts. In the first part I have made an outline of the family before Tobias Robertsen (1856-1929) and Andrea Pettersen Høyland (1873-1952) got married in 1891, as well as a short presentation of the two first generations. Tobias and Andrea had 9 children, of which 7 reached adulthood.

The second part gives a survey of all the descendants of Tobias and Andrea - the number of descendants has now passed 230. Most of them still live in the south of Norway, but there are also two branches in the United States as well as a smaller line living in Germany.

The booklet has 44 pages and is well illustrated. It also contains a cemetery survey as well as a list of explanations and abbreviations, sources and footnotes.
Posted by Dag T. Hoelseth at 17:25