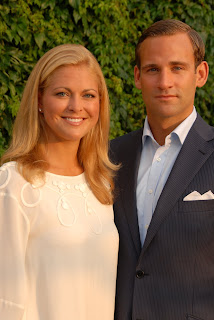 The Swedish Royal Court announced today the engagement between HRH Princess Madeleine and Jonas Bergström. The wedding will take place in late 2010 or early 2011.

The official announcement came only a day after the royal court refused to comment on Svenska Damtidning's claims that an engagement had taken place.

After the king had given his consent, I am sure that he brought the matter up with the government, as obviously the court wouldn't announce the engagement if it was not confident about the government's approval.

In accordance with the Act of Succession the government gave its formal approval in an extraordinary meeting today.

Unlike Daniel Westling, who upon marriage will become Prince of Sweden with the style Royal Highness as well as Duke of Västergötland, Jonas Bergström will "only" be titled Duke of Hälsingland and Gästrikland. This could be described as an unusual solution in Sweden, but it follows the practice in Spain where for instance Infanta Cristina's husband is titled Duke of Palma de Mallorca by marriage, but without the title Prince or style Royal Highness.