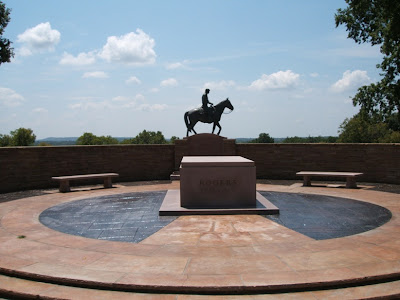 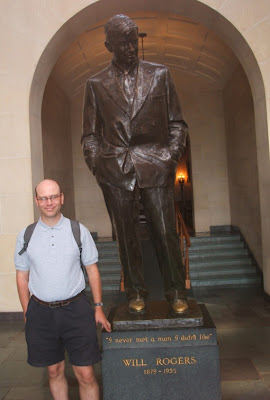 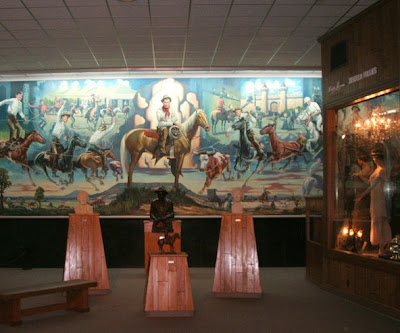 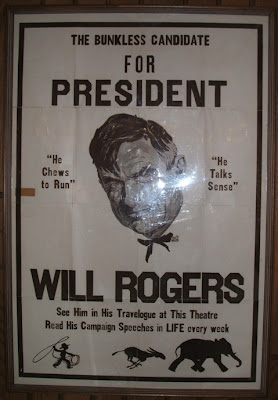 I had not heard about Will Rogers back in 2005 when I was invited to visit relatives in Tulsa, Oklahoma. But before leaving for the United States, I checked out various sights in the Tulsa area and was therefore not surprised when my relatives took me to the Will Rogers Memorial Museum in Claremore in Oologah county.

I enjoyed the museum and later I also read a biography about Rogers, «Never met a man I didn’t like. The Life and Writings of Will Rogers» by Joseph H. Carter (New York: Avon Books, 1991). The book was even signed by the author!

How should one describe Will Rogers in a few words? «Cherokee cowboy, actor, comedian, columnist, radio personality, speaker and humorist» - Joseph H.Carter’s introduction chapter sums it up well. You can read more about the life of Will Rogers at the website of the Memorial Museum.

However, as I am interested in genealogy, I’d like to share a few details about his ancestry. Rogers «was a Cherokee by heritage, but Irish and Scottish by higher percentages of pedigree». «My ancestors didn’t come over on the Mayflower, but they met the boat», he once said. William Penn Adair Rogers was born on 4 November 1879 on a ranch in Indian territory near what was later to become Oolagah*) as the eight child of Clement Vann Rogers (1839-1911) and Mary America Schrimsher (1838-1890). Clem’s father Robert Rogers belonged to the Blind Savannah Clan of the Cherokee Nation, while Clem’s mother Sallie Vann was of the Wolf Clan of the Cherokee. Under Cherokee law, Clem adopted his mother’s Wolf clan.

Will’s maternal grandfather was Dutch, which explains Mary’s maiden name, while the maternal grandmother was equally Welsh and Cherokee, belonging to the Paint Clan. Will was thus «nine thirty-seconds Cherokee Indian and became number 11,384 on the Cherokee Nation rolls». His wife Betty Blake (1879-1944) of Silver Springs, Arkansas, was the seventh child of James Blake and Amelia Crowder, said to be of English ancestry. Or just «Southern», as Carter’s book adds. Will and Betty had four children, of whom Will Rogers, Jr. (1911-1993) was a Democratic US Representative from California from 3 January 1943 to 23 May 1944. He later became a successful actor.

Will Rogers made several trips abroad, and during his third around the world trip he visited Norway in September 1934. In a telegram dated 7 September he writes: «You’ve heard of Norway’s beautiful fjords, high-walled canyons of water that run back for miles into the land. I took a small seaplane and flew over them for hours. Landed on their lakes and chased herds of reindeer through the snow in the plane. Minnesota can well be proud of its Fatherland. It’s wonderful and substantial. Skol.»

On his «great flight down from Norway» Will wrote 2 days later that «These Danes took nothing but a pig and common sense enough to stay out of war for fifty years. Today they, along with Sweden, Norway and Finland, are an example to the world of how to live neighborly and tend to your own business. There’s lots to be learned from these Scandinavians.»

The year before, he commented on Ruth Bryan Owen’s (1885-1954) appointment as US Ambassador to Denmark: «Ruth Bryan Owen is going as Ambassadoress to Denmark, or Sweden or Norway, or one of those. (Americans will never become civilized enough to tell a Swede from a Dane, or a Norwegian from a Swede. I know the difference means a lot to them, but it just means another tall blonde to us.) Well anyhow, Roosevelt is trading Ruth to that party for Greta Garbo and it’s the only bad trade he has made since he got in. Ruth’s got it on her any way you jump. Those three countries we have always thought a lot of (even if we don’t know ‘em apart). They built up our great Northwest , and when we sent the talented daughter of our Great Commoner we are giving ‘em the best we got.»

* According to the Wikipedia article about Will Rogers, based on writings by the Oololagh Lake Leader, he usually «claimed Claremore as his birthplace, «because nobody but an Indian can pronounce 'Oologah».»