Three days left to the royal wedding in Stockholm 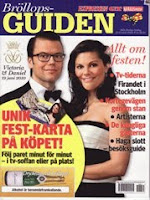 The wedding between Crown Princess Victoria of Sweden and Daniel Westling will as you all know by now take place in Stockholm on Saturday 19 June 2010. The media in Sweden - as well as in Norway and Denmark (and other places as well) - is having a field day, or to be exact - several field days! If you think the attention the royal wedding in Oslo in 2001 got was a bit too much, or the royal wedding in Copenhagen in 2004 for that matter, then I am afraid to say that you will have to expect a much larger "circus" in Stockholm. It has been going on for a while already. And in the coming days, the newspapers will publish an endless number of articles, the many blogs will flourish and the discussions on the various discussion forums covering royalty will go wild. I might write an article or two about my observations of the wedding as well, but my contributions will surely be peanuts to what others will offer in the coming days. Don't get me wrong. This is going to be a great celebration - not only of the happy couple - but also of the monarchical institution, which most certainly will be strengthened by the festivities. I am not the only one who has enjoyed the Bernadotte documentary which has been broadcasted the last few days. There have been many good newspaper and blog articles as well, even though you can also find the opposite...

I made a short visit to Sweden last weekend - to Tanum municipality to be exact, far away from the festivities in Stockholm. But even in Fjällbacka and Grebbestad you couldn't pass a kiosk window without noticing all the special wedding issues and tabloid front pages screaming about the royal wedding. The photo above is of the front page of Bröllups-Guiden, a special wedding issue published by Expressen, GT and Kvällsposten (all Bonniers newspapers which share half of the content). There were probably more than a dozen alternatives, but one is surely enough. The wedding issue gives you an entertaining survey of all the wedding souvenirs you can buy, both the ones approved by the court and the unofficial alternatives.

Plates, cups, key-rings, you name it... You will get the full program of the festivities, a useful map of the route the cortege will follow and a flash-back to several royal weddings and wedding dresses in the past. Sweden 1976, the United Kingdom 1981, the Netherlands 2002 etc.

Then there is a presentation of all the guests the journalists claim have been invited to the wedding, and how they are related to the Bernadottes. Surely useful, but not without mistakes. The same old allegation that Princess Märtha Louise of Norway lost her style Royal Highness in connection with her wedding in 2002, and the photos of the Crown Prince couple of Serbia (Yugoslavia) and Princess Margarita of Romania and her husband Radu Duda (titled Prince Radu by King Michael's court) have been mixed up. And you can read the tabloid journalist Johan T. Lindwall's article "Kärlekssagan. En seger för Victoria - och för kärleken!" ("The Love Story. A victory for Victoria - and for love!"). And if that is not enough, the Swedes want to make a bigger wedding cake than the Norwegian Crown Prince couple had in 2001. I hope it will taste well.

Finally, you can read about Haga Palace, where Crown Princess Victoria and Prince Daniel will reside after the wedding. In other words, plenty of stuff to read in order to get yourself prepared. But of course there are alternatives if you are not interested in the celebrations - the royal wedding is still peanuts to the World Cup in South Africa...