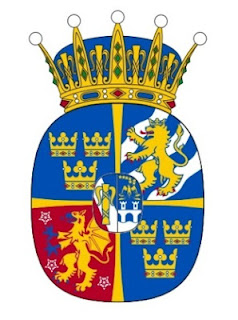 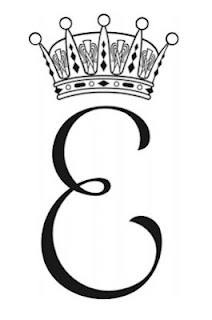 The christening of HRH Princess Estelle, the daughter of HRH Crown Princess Victoria and HRH Prince Daniel of Sweden, took place at the Palace Church in Stockholm on Tuesday 22 May 2012.

As has happened too often lately, other commitments made it impossible for me to write anything about the christening in advance or yesterday after the ceremony had taken place. On Monday I attended an extended committee meeting in connection with the preparations for the 31th International Congress for Genealogical and Heraldic Sciences, which will take place in Oslo in August 2014 (the 30th Congress takes place in Maastrict, the Netherlands in September 2012). And yesterday evening I attended the annual meeting of the Norwegian Genealogical Society. In other words, no time for blog writing. And as the ceremony took place in the middle of a work day, I didn't get the chance to watch any of it either.

But from what I have read and all the photos I have seen (there are at present 463 photos published at the official website's christening page, besides a film), the christening ceremony seems to have been a grand affair. The facts: The christening was officiated by Archbishop Anders Wejryd, assisted by Chaplain to The King and Bishop Emeritus Lars-Göran Lönnermark and Dean Åke Bonnier of the Cathedral Parish of Stockholm. Princess Estelle's sponsors were the Prince of Orange (Willem-Alexander of the Netherlands), Crown Prince Haakon of Norway, Crown Princess Mary of Denmark, Prince Carl Philip of Sweden and Ms. Anna Westling Söderström (Prince Daniel's sister).

The guest list, which can be viewed in full here, was long and impressive enough. It included, besides the Crown Princess couple and the main person:

HM The King's Family
Belgium
Denmark
Finland
Iceland
Luxembourg
The Netherlands
Norway
In addition numerous members of the families of Queen Silvia and Prince Daniel besides representatives of the official Sweden. Not included in the official guest list, but very much present and well covered by the media and the royalty watchers, were Prince Carl Philip's partner Sofia Hellqvist and Princess Madeleine's partner Chris O'Neill.

Interestingly enough it appeared that King Carl Gustaf had bestowed upon Princess Estelle the Royal Order of the Seraphim.  The arms and monogram of Princess Estelle (see images above) were also published. The four quarters of the arms show the lesser coat of arms of Sweden (field 1 and 4), the arms of Folkunga (field 2) and in field 3 the arms of Östergötland (Princess Estelle is Duchess of Östergötland), while the inescutcheon shows the arms of the House of Bernadotte. The arms are crowned by the princess crown. The monogram consists of the initial E and a princess crown above. The heraldic artist Vladimir A. Sagerlund has designed both the arms and the monogram, which were approved by the king.