US Secretary of State Hillary Clinton to Norway 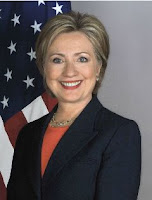 The US Secretary of State Hillary Clinton is going to Norway for an official visit later this week. She will arrive in Oslo on the evening of Thursday 31 May after leaving the first stop on her European tour, Denmark, behind. On Friday 1 June Clinton will have meetings with both prime minister Jens Stoltenberg and foreign secretary Jonas Gahr Støre and give keynote remarks at the global health conference hosted by the Norwegian government, "A World in Transition - Charting a New Path in Global Health". Queen Sonja is also going to attend the same conference held at Oslo City Hall. King Harald will grant Clinton an audience at the Royal Palace, where Queen Sonja, Crown Prince Haakon and Crown Princess Mette-Marit will also be present.

According to Norway.org, Clinton also wants to meet with survivors from the Utøya island massacre of 22 July 2011.

On 2 June the US secretary of state and foreign secretary Støre will travel to Tromsø, home of the Arctic Council Permanent Secretariat, for discussions of US-Norwegian co-operation in the Arctic. According to the press releases made by the Norwegian FO and the US Department of State,  the discussions will focus on climate change and the sustainable development of untapped resources.

Hillary Clinton's visit will be her third to Norway, but her first as secretary of state. As US first lady she visited Lillehammer in 1994 in connection with the Olympic Winther Games, and she paid Svalbard a visit in 2004, then as US Senator, together with a delegation which included Senators John McCain, Lindsey Graham and John Sununu.

Following Clinton's visit to Norway, she will head on to Sweden for meetings with senior Swedish officials and where she will also participate in a Climate and Clean Air Coalition event on short-lived climate pollutants. It seems she will not meet any Swedish royals, though. I mentioned the visit to Denmark earlier. Although there is nothing about an audience with Queen Margrethe, cf. Kongehuset.dk's calendar, the website Altinget.dk claims that they will indeed get together for a short conversation.

The secretary of state's trip to Europe also includes visits to Armenia, Georgia, Azerbaijan and Turkey.

Postscript 30 May 2012: The calendar at Kongehuset.dk, the official website of the Danish Royal Court, has now been updated and states that Queen Margrethe II will receive the US Secretary of State at Amalienborg Thursday 31 May 2012.