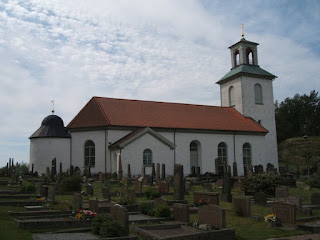 Valla Church. The Huitfeldt burial chamber can be seen at the back of the church. 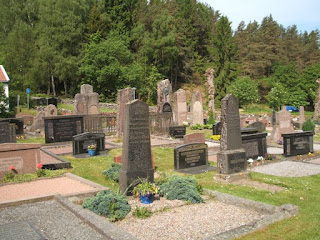 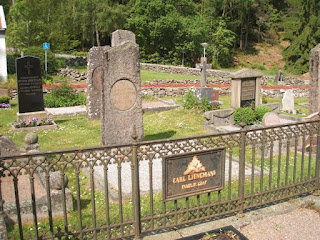 I visited the island of Tjörn in Bohuslän, Sweden, for the first time in 1995 when I was on a study trip with other history students from the University of Oslo. During the short stay we visited Valla Church to see the burial chamber of the noble woman Margrethe Huitfeldt (Dyre) and her family.

When my family and I left the locality of Rönnäng last Monday (28 May 2012) to return back home to Norway, we took another route than when we came to the island two days earlier. Instead of crossing the bridge to Stenungsund, we headed up north from road 169, passing Valla Church and later Sundsby Seat Farm (Manor) at the penninsula of Mjörn and then to the third largest in Sweden, Orust, before reaching E6 at Uddevalla. We made a short stop at Valla Church, as I wanted to take new photos of the church and the burial chamber with my digital camera. Unfortunately - and maybe not too surprisingly - the church was closed - one obviously has to make an appointment in advance, as the group did in 1995. I will try to locate the photos taken in 1995 - they are kept somewhere in the attics - and get them digitalized.

The Danish-Norwegian noble woman Margrethe Huitfeldt (1608-1683) was the daughter of Hartvig Andersen Huitfeldt til Skjelbred og Rommegaard (d. 1637) og Bente Jensdatter Skak (d. 1622). She married the Danish royal court official Thomas Iversson Dyre til Hvidstedgaard (1605-1651) in 1635 and moved the same year to Sundsby Säteri (Seat farm/manor) at Mjörn in today's Tjörn municipality, Bohuslän, which she had inherited from her maternal grandmother, Gurun Green, ten years earlier. Margrethe and Thomas had 3 children - Bente (1636-1636), Hartvig (1638-1646) and Ivar (1644-1663). After Margrethe became a widow in 1651, she bequeathed her estate, which then besides Sundsby Säteri also consisted of Åby Säteri in northern Bohuslän, to a scholarship foundation which assisted young men from Bohuslän to be educated as priests. According to the tourist brochure about the manor of Sundsby, the bequest is the second largest donation of land that has ever been made in Sweden. The estate was bought by Tjörn municipality from Kungliga och Hvitfeldska Stiftelsen (the Royal and Huitfeldt Foundation) in 2003.

The buildings are open to the public. From October to May Sundsby is open Thursdays to Sundays 11 a.m.-5 p.m, from June to August every day from 11 a.m. to 6 p.m. and in September every day from 11 to 17. In other words, we thought it was closed when we passed the manor by car last Monday, but the property seemed to be full of people. It means that we have to return another time to see both the Huitfeldt burial chamber and the Sundsby manor!

For more information about and photos of the Sundsby manor, go to Kaffehuset i Sundsby website (the Coffee House in Sundsby) or Tjörn municipality's official website (both in Swedish).

The present church building at Valla was built 1859-1861. The burial chamber is from the 1660s and was not torn down when the old church was replaced by the present one.
Posted by Dag T. Hoelseth at 23:51