Bjorn Egeli: A Life in Images by Peter E. Egeli 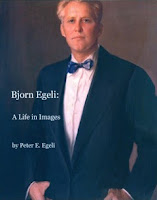 A biography of the Norwegian-born US American portrait painter Bjorn Egeli (1900-1984) has recently been published, and I received my copy today. The book of 65 pages gives a short introduction to Bjorn Egeli's life and artistic career and includes several wonderful images of his works, including a portrait of President Dwight D. Eisenhower (Egeli also painted a portrait of President Richard Nixon).

Bjorn Egeli, originally Herbjørn Peter Egeli, was born in Horten in Norway on 15 November 1900 as the eldest son of Even (Herbjørnsen) Egeli (1874-1915) of Kristiansand and Josephine Mathilde Wennerstrøm (1875-1921) of Hidra outside Flekkefjord. While Even Egeli and his two brothers Torkild and Hermann were born in Kristiansand, the Egeli family originally came from the cotter's farm Øykjeli at Haukeli in Vinje, Telemark, where their great-grandfather Svein Olsen Egeli (1779-1853) settled around 1826. The Egeli family were well-known for their artistic skills. Bjorn Egeli's great-great-uncle Tor Sveinsen (1825-1882) was a recognized rosepainter in Telemark before he together with his family as well as 2 brothers and also his widowed mother emigrated to Wisconsin, USA in 1861. Tor's father Svein Olsen Egeli and brother Even (1822-1873) were both skilled ski carpenters. After Even's death two of his children - Svein and Hæge - and eventually also his widow Liv Tollevsdatter (1824-1905) - emigrated to the United States, leaving behind the eldest son Herbjørn Evensen Egeli (1848-1893). Herbjørn, who served in Kristiansand as an (non-commissioned) officer and later settled down as a fireman, was the artist Bjorn Egeli's grandfather.

Bjorn Egeli moved with his family (he got two younger brothers, Arne Torleif (1902-1973) and Odd Eivind (1910-1970) from Horten to Kristiania (now Oslo) where he went to school. The family eventually settled in the parish of Vålerenga. After his father's death (he died of tuberculosis, as did Bjorn's grandparents and two first cousins) in 1915, Bjorn went to sea, where he spent 7 years before settling down in the United States, where he was trained as an artist. In 1931 he returned to Norway to visit his family. This turned out to be his last visit to his homeland. In 1932 he was married to Lois Baldwin (1908-1993) and had five children - Peter, Cedric, Bjorn James, Mary Lois and Carolyn - who all became professional artists. Also several grandchildren followed the same path. Bjorn, who bought the Glebe Farm in Valley Lee, St. Mary's County, Maryland in 1942, died on 20 October 1984, nearly 84 years old.

I know the Egeli family well, as Bjorn's father Even Egeli (1874-1915) was the elder brother of my great-grandfather Torkild Johan Ekeli (1878-1939), and thus Bjorn was the first cousin of my grandmother Torborg Hoelseth (1924-1992). Having worked on my family genealogy for years, I tracked down the Egelis in Maryland in 1997 (for unknown reasons the Ekeli branch of Sandefjord - the spelling of the family name varied in the various branches - must have lost contact with Even Egeli's branch after Bjorn went to sea - there is no indication that Bjorn met his Sandefjord relatives during his visit in 1931 - the Sandefjord Ekelis kept in touch with Even and Torkild's younger brother Hermann, however).

Since 1997 we have visited eachother in Norway and in the United States several times, and Bjorn's eldest son Peter and his wife were guests in my wedding in 2007. Considering the family connections, there is no wonder why the new book will become a treasured item in my library!

Some information about the Egeli/Ekeli family - including links to several Egeli websites in the United States - can be found at my website. See also the biography of Bjorn Ekeli at Wikipedia.
Posted by Dag T. Hoelseth at 22:25