The latest issue of Våpenbrevet (No. 89, vol. 39, 2013), the newsletter of Norsk Heraldisk Forening (The Norwegian Heraldry Society), arrived in my mailbox today. The main article focuses on the proposal to replace the present arms of the Church of Norway (a cross laid over two St. Olav's axes, see below) with a logo (emblem), possibly inspired by the rose window of the Nidaros Cathedral's west front, as suggested by Professor Knut Lundby at the University of Oslo (see below).

The Theological Committee of the Church of Norway, presided by Stephanie Dietrich, refers to the St. Olav's axe as a "murder weapon" and symbolizes violence and harassment/injustice. The Norwegian Heraldry Society, represented by its chairman  Tom S. Vadholm, reminds the readers that the axe symbolizes St. Olav's death at Stiklestad and his death is regarded as a marthyr's death. He opposes the idea of replacing an old, Norwegian tradition with "a newfangled logo". 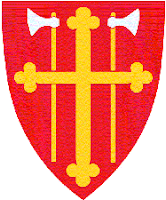 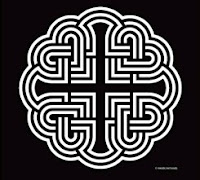 An article by Vadholm covering the same topic can be read at the Norwegian Heraldry Society's website (in Norwegian only).

In the latest issue of Våpenbrevet one can also read the minutes of the society's annual meeting, which took place in May 2013, as well as articles on the comital family of Guicciardini, the heraldry exhibition at Galleri Vera in Drøbak in March 2013, where the artist Einar Evar showed his works, and the 7th Heraldic Conference in Trondheim (24-26 May 2013).
Posted by Dag T. Hoelseth at 20:39