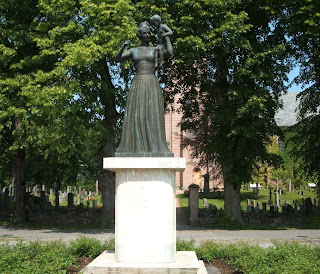 The statue of Crown Princess Märtha with her son Prince Harald, now King Harald V, on her arm was made by sculptor Dyre Vaa (1903-1980).

The bronze statue was cast in 1959, but first unveiled by King Olav V on 29 August 1969. The original plan was to place the statue in a park planned to be constructed west of Asker, but the statue was finally placed outside Asker Church. The statue is 2,80 m high (including the base the monument is around 5 m high) and the base of the statue is made of syenite.

(To the right when you pass the Southern gate of the cemetery behind the statue one can find the grave of Crown Princess Märtha's eldest daughter Princess Ragnhild, Mrs. Lorentzen (1930-2012).

Postscript 7 July 2013 at 23:40:  It should be added that Asker og Bærum Leksikon (Encyclopaedia), 2006, p. 355, claims that the statue was unveiled on 28 September 1969 (after being stored since 1958). This is definately wrong, cf. the newspaper references above. However, the entry about the Crown Princess Märtha monument also claim that it is 4 m high (statue + base), while Aftenposten 12 June 1969 No. 261, says it is about 5 m high. I really have no idea. The monument is named "A happy mother to a little boy" and after all the disagremeents over where to place the statue it was King Olav himself who ended the discussion by expressing his wish that the statue should be outside the church.