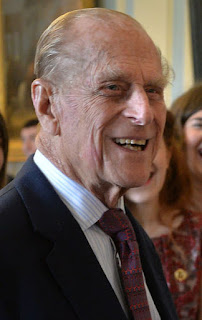 Yesterday morning I woke up to the news (*) that «The Queen's entire household [had been] called to Buckingham Palace for [an] 'highly unusual' emergency meeting» and rumours were circulating that a member of the royal family had died, with Prince Philip's name being mentioned more than others. The Sun even managed to report that Prince Philip had died. Soon it fortunately turned out that there was nothing extraordinary about the staff meeting, and that the senior royals were all well.

Later on Thursday 4 May, Buckingham Palace announced that Prince Philip, who turns 96 on 10 June, was to retire from public duty:


«HRH The Duke of Edinburgh

His Royal Highness The Duke of Edinburgh has decided that he will no longer carry out public engagements from the autumn of this year. In taking this decision, The Duke has the full support of The Queen.

Prince Philip will attend previously scheduled engagements between now and August, both individually and accompanying The Queen. Thereafter, The Duke will not be accepting new invitations for visits and engagements, although he may still choose to attend certain public events from time to time.

The Duke of Edinburgh is Patron, President or a member of over 780 organisations, with which he will continue to be associated, although he will no longer play an active role by attending engagements.

Her Majesty will continue to carry out a full programme of official engagements with the support of members of the Royal Family.»

The Greek-born Prince Philip married the then Princess Elizabeth in 1947. Since 1952, The Duke of Edinburgh has carried out 22,191 solo engagements, we were told by Buckingham Palace's Twitter account. 22,191 solo engagements. No wonder that Prince Philip yesterday received praise from all corners of the world for his «70 Years as as Her Majesty's "Rock"». His retirement is well deserved. I would like you to read the following sentence once more, though: «[...] he may still choose to attend certain public events from time to time». In his 96th, soon 97th, year! And the Queen will carry on as usual with the support of the rest of her family ...

(*) The link goes to a Daily Mail article which was updated several times after the tweet was posted.