Official celebrations of the King and Queen of Norway 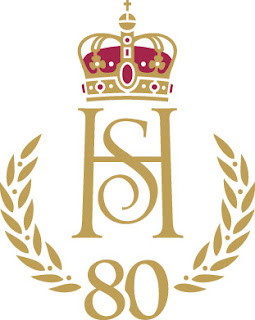 The Royal Court has released the following list of heads of state and royals attending the celebrations:

Norway
Denmark
Sweden
**
Luxembourg
Monaco
The Netherlands
**
Belgium
Spain
United Kingdom
**
Greece
Finland
Iceland
All in all 183 guests were present at the Royal Palace on Tuesday. When the royals greeted the people from the balcony, all the grandchildren of the king and queen were present - Princess Ingrid Alexandra, Prince Sverre Magnus, Maud Angelica Behn, Leah Isadora Behn and Emma Tallulah Behn. They were also included in the official photo which was published on Tuesday night.

In addition to the royals and dignitaries above also representatives of the official Norway were present, and surely also other family members of the king and queen. I wasn't able to watch TV when the guests arrived, so I am not able to give more details at present. Further details about the celebrations can be found at the official website. For photos of some of the guests, go here.