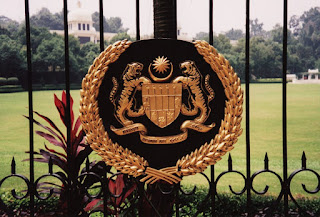 The closest I got to the Royal Palace (Istana Negara) in Kuala Lumpur ... © 2004 Dag Trygsland Hoelseth.

The Sultan of Pahang, Abdullah Ri'ayatuddin, was sworn in as the 16th Yang di-Pertuan Agong (King/Head of state) of Malaysia  in Kuala Lumpur, the capital of Malaysia, today, following his election by the Conference of Rulers last Thursday. At the same time the Sultan of Perak, Nazrin Muizzuddin Shah, took the oath following the re-election as Timbalan Yang di-Pertuan Agong (Deputy King/Head of state).

The previous king, Muhammad V, Sultan of Kelantan, abdicated the throne on 6 January 2019, and the Timbalan Yang di-Pertuan Agong acted as Head of state until today.

The new Yang di-Pertuan Agong of Malaysia, Abdullah Ri'ayatuddin, b. 30 July 1959, succeeded as Sultan of Pahang as recent as 15 January 2019 following the abdication of his father, Sultan Ahmad. Abdullah has been married to Tunku Azizah Aminah Maimunah Iskandariah Sultan Iskandar, b 5 August 1960, since 6 March 1986. His second wife, since 1993, is named Cik Puan Julia Aisha binti ‘Abdu’llah, b. 1971. His first wife will act as the official consort (titled Raja permaisuri Agong). The Sultan of Pahang has six children by his first wife and three by his second, cf. The Royal Ark. In addition he has also two adopted sons born prior to his children by his first wife.

The new King is described as a huge football fan and a supporter of the English football team Arsenal FC. According to the newspaper The Star, «Sultan Abdullah, who is quite a skilful midfielder in football, is just as adept at hockey, tennis, golf, horse riding, scuba diving, squash and polo».

Today's events in Kuala Lumpur means that I have updated my Longest reigns (current monarchs) page. If nothing happens in the meantime, the website will be updated again in late April when the Emperor of Japan, Akihito, abdicates.
Posted by Dag T. Hoelseth at 22:34