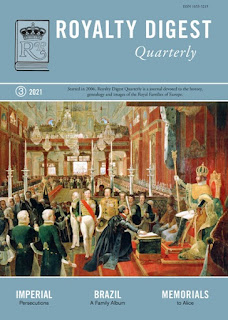 I received the third issue of Royalty Digest Quarterly ages ago, and as the fourth issue is just around the corner, I thought it was on time to write a few words. I have several periodicals in line to be commented on, so stay tuned for the next few weeks ...

My first impression: What a beautiful cover! Both the greyish-blue cover and the photo – of the coronation of Emperor Dom Pedro I of Brazil on 1 December 1822 in the Old Cathedral of Rio de Janeiro – look great. The photo is followed up by Charlotte Zeepvat's article  The Imperial House of Brazil – A Family Album. Besides the introduction to the Brazilian imperial family the readers can enjoy nearly 100 illustrations of various family members and residences. There are many reasons why I would like to visit Brazil one day – the imperial summer palace at Petrópolis is one of them – it just looks splendid! In addition to the illustrations there are also four pages of genealogical tables.

Charlotte Zeepvat's second contribition is the article A Long Chain of Persecutions. Princess Luise Sophie of Schleswig-Holstein and Prince Friedrich Leopold of Prussia. Part I: A Divided Family. The couple in question is Princess Luise Sophie (1866–1952), the sixth child of Duke Friedrich of Schleswig-Holstein-Sonderburg-Augustenburg (1829–1880), by his wife Princess Adelheid of Hohenlohe-Langenburg (1835–1900). Luise Sophie married in 1889 Prince Friedrich Leopold of Prussia (1865–1931). Her elder sister Auguste Viktoria (1858–1921) was the first wife of Emperor Wilhelm II (1859–1941), and who caused the long chain of persecutions. It is almost unbelieveble how badly treated the princess and her husband were. I look forward to reading the second part.

The latter column includes news from Austria, Bentheim-Steinfurt, Liechtenstein. Schaumburg-Lippe and Bourbon-Two Sicilies. The aforementioned Albert Latapie (b. 1877) was employed by Princess Isabel of Brazil and her husband Count d'Eu and their children. The article contains extracts of his memoirs.
All in all the issue had several most readable articles and fortunately I don't have to wait long for the fourth and last issue of 2021 to arrive.
Information about Royalty Digest Quarterly can be found at its editor's website Royalbooks.se. See earlier presentations of RDQ here. See also its Facebook page.
Posted by Dag T. Hoelseth at 21:26