The Royal Palace in Stockholm, Sweden announced yesterday that Gunnila Bernadotte, Countess of Wisborg, the second wife of Carl Johan Bernadotte, Count of Wisborg (1916–2012), an uncle of King Carl XVI Gustaf of Sweden, had died the day before, on Monday 12 September 2016, 93 years old.

Gunnila Märta Louise Wachtmeister, daughter of Count Nils Wachtmeister af Johannishus and Märta De Geer af Leufsta, was born in Stockholm* on 12 May 1923. In 1942 she married Carl-Herman Bussler, b. 1918, son of Karl-Gerhard Bussler and Catharina Stenbock. Carl-Herman died in 1981, and 7 years later Gunnila married Count Carl Johan, who was a widower.

Gunnila was survived by her children Madeleine, b. 1948, and Carl-Fredrik (Fred), b. 1951. The newspapers which wrote about her death mentioned that she had three children with her first husband, something that was also mentioned on Wikipedia (yes, I know) and which was pointed out in comments to a blog article written by Trond Norén Isaksen yesterday. We also discussed the question about the third child by e-mail. As a third child was not mentioned in the death announcement of Count Carl Johan in 2012, it was easy to conclude that she must have died some time earlier.

Naturally I set out to find out more details about the third child, named Louise. Very soon I found an entry in the Births from the Swedish Death Index, 1901-2006 at Ancestry.com with the following information:

Her parents were not listed, however. I posted a message at the Norwegian Digital Archives' users' forum and asked if someone could help me with a look-up in Sveriges Dödbok 1901–2013, which lists all deaths in Sweden in the said period. I was contacted by a fellow genealogist in Norway who had access to «the death book» and could provide me both with the details I needed as well as with a link to a cemetery register I didn't know of (I had checked other online cemetery registers before  I asked him about Louise).

While waiting for the look-up I had, by the way, also discovered that Louise was listed in Vem er hvem? Norrland Supplement Register, 1968, p. 551.

In Sveriges Dödbok Louise Bussler was listed as having died on 26 December 1986, last residence was Lund farm in Nyköping (where Fred Bussler lives today). According to the cemetery register, Gravstensinventeringen, she was buried at Bärbo kyrkogård (churchyard) in Nyköping. The register gave, however, 23 December 1986 as her death date, but when I this morning finally discovered that the search result provided a link to a page with more details, I noted that 26 December was inscribed on the gravestone, and that her father Carl-Herman was buried together with her.

In other words, there seemed to be a fourth child born to Carl-Herman and Gunnila. The separate entry for the girl buried under the stone cross stated that she was named Catharina and was born on 21 July 1946 and died soon after on 8 August 1946. Sveriges Dödbok informed that she like her elder sister Louise was born in the parish Hedvig Eleonora (Stockholms stad, Uppland), and with Linnégatan 25 as the place of living. The person putting the details into the register had also written that «Bredvid korset finns faderns och en systers gravhäll.» («Next to the cross there is a grave plate for her father and a sister.»)

The evidence that there was in fact a fourth child born to Carl-Herman and Gunnila was strong, but I still felt I needed an independent source which could confirm the relationship. While the cemetery register Gravstensinventeringen as far as I can tell is based on information from visits to cemeteries and from the official cemetery administration, it is maintained by the Swedish Genealogical Society which is also responsible for the publishing of Sveriges Dödbok, so the two sources are not completely independent of each other. The details in the said register about the connection between people buried in the two graves does not come from an official source.

The churchbook which lists births in 1946 is not yet available. In order to find more details I would have to either look for Swedish newspapers published in July and August 1946 or contact the family. The latter would not be very appropriate at the time being, as Fred and Madeleine had just lost their mother and she is not even buried yet.

A selection of Swedish national newspapers is available on microfilm at the National Library in Oslo, but it would take some time before I got the opportunity to go there. Then I thought about Kungliga biblioteket (The National Library of Sweden) in Stockholm, which offers a selection of Swedish newspapers online. When searching for the name Gunnila Bussler for the year of 1946 I got the following results: 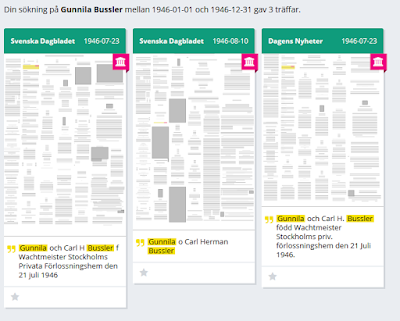 The editions of 1946 are still copyrighted, so I would have had to visit the library physically in order to read the newspaper online. But even though I haven't been able to read the actual notices, the search results give enough evidence that Gunnila and Carl-Herman Bussler on 21 July 1946 had a child born at the Stockholm Private Maternity Home. I don't know for sure what was in the edition of 10 August 1946. But as it was dated two days after the death of Catharina, it is not far-fetched to assume that the edition brought the death announcement

Now, I don't consider it as a groundbreaking discovery that I have found the details of a fourth child. It is not as if I will soon be invited into the Genealogists' Hall of Fame. But the short-lived child deserves a place in the genealogy books. That Gunnila Bernadotte, Countess of Wisborg, brought four children into the world and survived two of them, is also a story to tell.

* Postscript 15 September 2016
Trond Norén Isaksen commented in an e-mail today that Count Carl Johan Bernadotte had told him that his wife Gunnila was born at Tistad Castle (Tista Palace) in Nyköping municipality, the home of the Wachtmeister noble family that Gunnila was born into. In other words, Stockholm as the given place of birth might not be correct.

Checking Ted Rosvall's Bernadotteättlingar from 2010, the book says on page 60 that Gunnila was born in «Stockholm/Engelbrekt», the latter referring to Engelbrekts församling (Parish of Engelbrekt). Rosvall is quite consistent in listing the parish where the person in question was christened as the place of birth. It is of course quite common that one is born one place but christened another place, even if «in older days» the christening and birth place would normally be the same, as people were born at home. In 1923, on the other hand, many people in higher classes would be born at maternity homes in the bigger cities.

I had some business to do in the library of the Norwegian Genealogical Society today, so I took the time to check the churchbooks in ArkivDigital, which the society has a subscription to.

Gunnila is listed in the churchbooks of both Bärbo församling and Engelbrekts församling:
In the column «Särskilda anteckningar, såsom om moderens nedkomstort (om annan än församlingen), inkomna och afsända attester m.m.» («Separate remarks such as the mother's place of delivery if different from the parish), incoming and dispatched certificates etc.)» for Bärbo one can read the text «Nedkomstort Engelbrechts förs., Stockholm, attest dat 14/7 1923» («Place of delivery Engelbrechts förs., Stockholm, certificate [reference] dat[ed] 14 July 1923»). Engelbrekts on the other hand has a reference to Bärbo, which is where Tista Castle is situated, and where Gunnila is listed. (The christening took place on 8 July 1923 and the pastor was, if I understand the handwriting, G. Rosen.)

Maybe there was a maternity home in the parish of Engelbrekt in Stockholm? On the website
Sveriges församlingar genom tiderna («Sweden's parishes through the times» one can read that Engelbrekt was separated from Hedvig Eleonora in 1906, and that births at Stocholms Private Förlossningshem (which was the place of birth for Gunnila's daughter Catharina in 1946, see above) was registered in the churchbook for Engelbrekt from 1932 to 1946, so this doesn't help us much. Catharina's birth was nevertheless registered in Hedvig Eleonora according to Sveriges Dödbok.
In other words, we have conflicting information here. Count Carl Johan was close to the person in question, while the entry in the churchbook is much closer in time to the event (the birth of Gunnila), and was quite explisite in stating the place of birth. So for now, I will keep the reference to Stockholm, but it is still important to make a note of Carl Johan's comments. There could have been a misunderstanding, of course. There is no doubt that Gunnila grew up at Tista Castle in Bärbo, Nyköping, even if the birth and christening most likely took place in Stockholm. Maybe other sources, like for instance a midwife report or copy of a passport, could solve the question once and for all sometime in the future?

Interestingly enough, Gunnila's name is spelt Gunnilla in Engelbrekts and Gunnila in Bärbo. The latter is used in official sources later, including Ratsit, which is based on the public register.