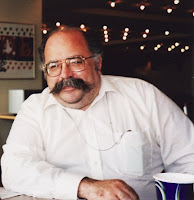 The genealogist William A. Reitwiesner, b. 8 March 1954, died on Friday 12 November 2010, only 56 years old. His works included The American ancestors and relatives of Lady Diana Frances Spencer (1981), Matrilineal descents of the European royalty (first published in 1990), Matrilineal ancestry of the matrilineal descents (1993) and The Lesbian ancestors of Prince Rainier of Monaco, Dr. Otto von Habsburg, Brooke Shields, and the Marquis de Sade (1995).

He specialized on royal genealogy, but also worked on the ancestry of US presidents and other US American politicians, as shown at his website Wargs.com. I will always treasure all his contributions at the newsgroup alt.talk.royalty, the information he helped me with on many occasions as well his great sense of humour.

The photo of William A. Reitwiesner was taken during a lunch in September 1999 in Washington D.C.

My sincere condolences to the Reitwiesner family.