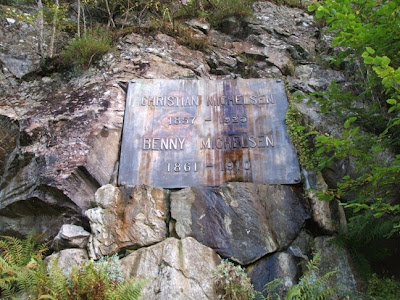 Peter Christian Hersleb Kjerschow Michelsen (b. 15 March 1857, d. 29 June 1925) was Prime Minister of Norway from 1905 to 1907 and thus played a central role in the dissolution of the union between Norway and Sweden in 1905 as well as the election of Prince Carl of Denmark as King of Norway the same year.

Christian and Benny Michelsen got their last resting place in the park of Gamlehaugen, their residence at Fjøsanger outside Bergen. Gamlehaugen later became the Norwegian king's official residence in Bergen.

The photo was taken during a visit in September 2005.