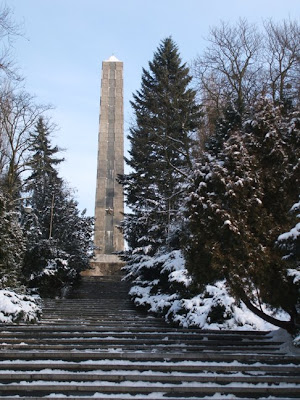 (1) The Heroes' monument in the Citadel Park, Poznan. 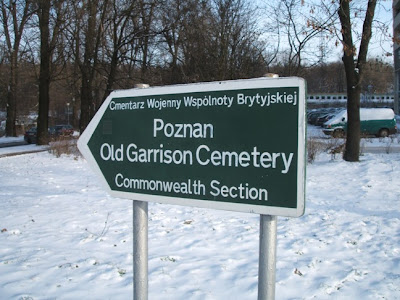 (2) On my last day in Poznan during my visit in November 2010, I visited the Citadel Park at Winiary Hill, which is a short walk north of the city centre. The Fortress Winiary was destroyed in the siege of 1945 and the remains of the fortifications today house the Museum of the Poznan Army and the Citadel Museum. The rest of the area the fortress covered is now a large park.
In the south west of the park one can find a series of cemeteries, including the most famous of the all, the Old Garrison Cemetery.
It was not easy to know exactly where the boarders between the cemeteries went - there are 7-8 in all. This blog article will focus on the war graves at the Old Garrison Cemetery, while later articles covering the Citadel Park will deal with other war cemeteries as well as the cemetery sections for civilians.
In the Old Garrison Cemetery one can find the graves of Commonwealth servicemen of WW1 as well as allied airmen shot down over Poland during WW2, and is also the resting place for several of those captured and executed after «The Great Escape». I am sure that most of my blog the readers have heard about this WW2 event and/or has seen the movie with the same name (I just watched it for the first time in years). In March 1944 as many as 76 POWs managed to escape from the Stalag Luft III (POW Camp for airmen III) near Sagan (Żagań) in Lower Silesia (today in Poland) through a tunnel. 73 of the prisoners were later captured, and of these 50 were executed. The 3 men who made it to safety were the Norwegians Per Bergsland and Jens Müller and the Dutchman Bram van der Stok. I will come back to one of the 2 Norwegians who were executed, Sgt. Halldor Espelid, later in the blog article.
The leader of the Great Escape, Squadron Leader Roger Bushell, who was portrayed in the movie by the actor Richard Attenborough (brother of the naturalist and wildlife filmmaker Sir David Attenborough), is also buried at the Old Garrison Cemetery. His grave is maybe the most famous of them all, but I didn’t look for it and thus didn’t take a photo. There is a photo of his grave at Findagrave.com (not a good one, though).
Another cemetery section is dedicated to Red Army killed during the 1945 siege. Between the Soviet and Commonwealth memorials are also plots dedicated to Poles killed during Fascism and also during the 1918-19 Wielkopolska uprising and to the victims of Poznan during the 1956 uprising. 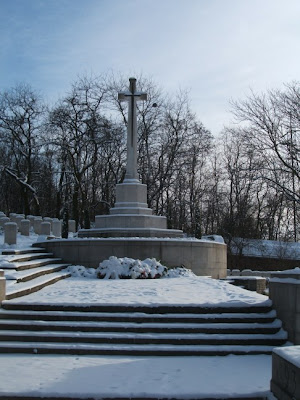 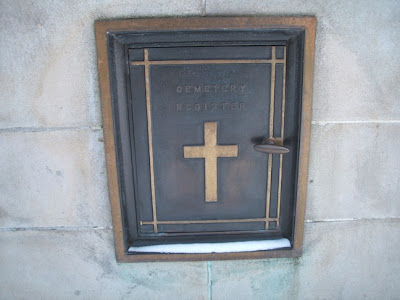 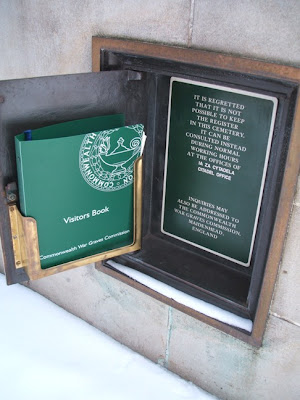 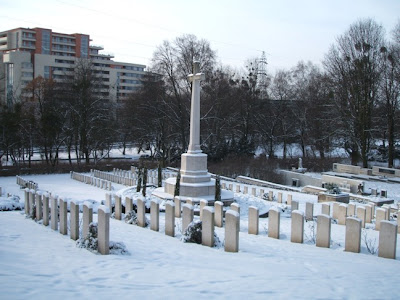 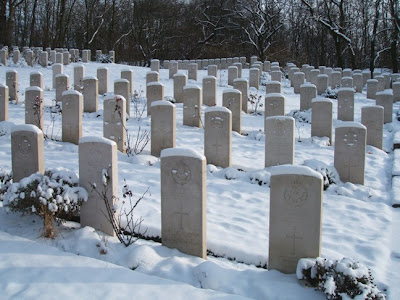 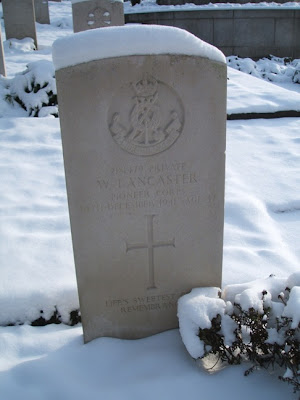 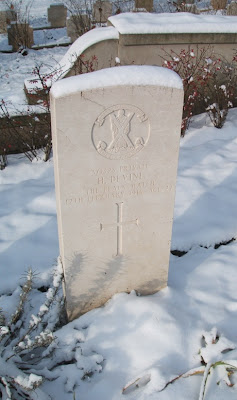 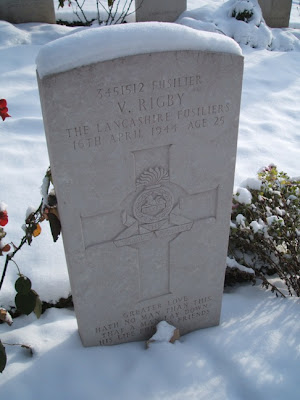 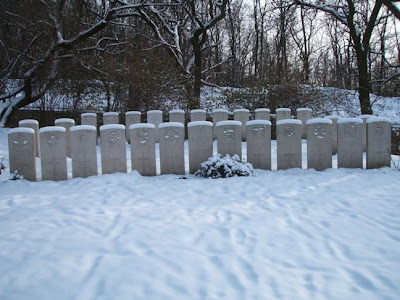 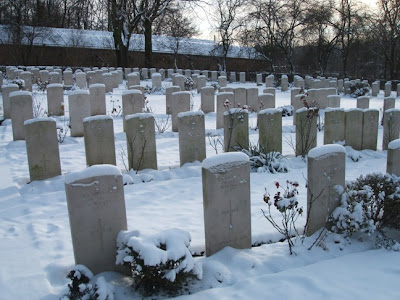 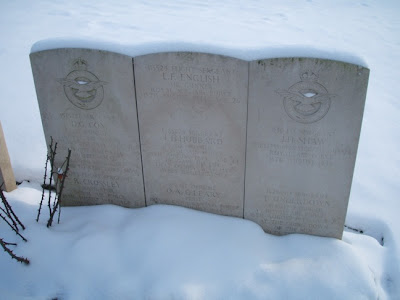 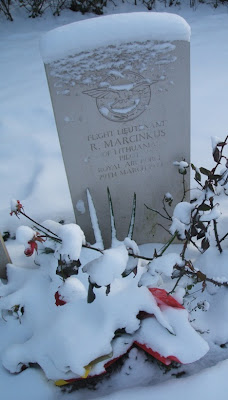 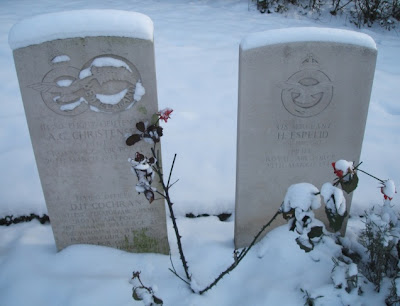 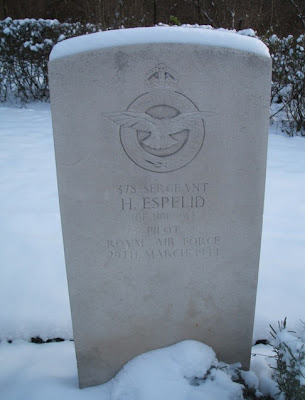 (16) Many years ago I read an article in one of Norway’s weekly magazines about a Norwegian – a woman I believe – who during a visit to Poland had visited a cemetery and found a gravestone with the name H. Espelid engraved. As the name reminded her of Ingrid Espelid Hovig, who is a famous and beloved Norwegian TV chef and cook books author, she took a photograph of the grave and later contacted Mrs. Hovig, and it turned out that it was the grave of her elder brother the Norwegian tourist had found. As far as I remember the story correctly – this has to be taken with some reservation – Mrs. Hovig didn't know where her brother was buried. A bit strange, perhaps, concerning that the name was engraved, but if I remember the story correctly, it could be that a communication error was made. The ashes were after all moved from a cemetery in Kiel to the Old Garrison Cemetery some time after the war.
Anyway, when I walked towards the Citadel Park cemeteries that November morning, I came to think about the said magazine article. I had no recollection of where in Poland the Norwegian had come over Halldor Espelid’s grave. I was therefore amazed when towards the end of my visit to the cemetery I found Espelid’s grave in the last row.
Sgt. Halldor Espelid was born at Florvåg, Askøy (near Bergen in Western Norway) on 6 October 1920 as the oldest son of Ivar (Monsen) Espelid (b. Hamre 20 February 1880, d. 7 November 1946) by his wife Gudrid (Haldorsdatter) Eidnes (b. Ullensvang 6 December 1883, d. 5 March 1959). As far as I understand it Halldor got training as a pilot among others in the Little Norway camp in Canada (I will come back with a blog article on this camp later on) and served in the Royal Air Force when he was captured on 27 August 1942. On 23 March 1944 he was one of 76 airmen who escaped from the Stalag Luft III (see above). He got as far as Flensburg near the Danish boarder before he was recaptured and later executed by Gestapo on 29 March 1944. He was cremated and buried at Kiel, and his ashes were later brought to the Old Garrison Cemetery in Poznan.
There are at least two memorials in Norway where Halldor Espelid’s name is listed – one at Bergen Katedralskole (Disnorge.no/gravminner, id. 1171726) and at Akershus Fortress (Disnorge.no/gravminner, id. 2065326) – you might have to doubleclick to see the pictures.
Another brother of Halldor Espelid, Mons Gunnstein Espelid (b. Kleppestø, Askøy 22 April 1926, d. 16 March 2009), was a member of the Storting (Norwegian Parliament) from 1985 to 1989, representing Venstre (the Liberals). Besides Halldor, Mons and the aforementioned TV chef Ingrid Espelid Hovig, b. Kleppestø, Askøy 3 June 1924 (source 1 and 2), Ivar and Gudrid Espelid also had (at least) 2 other children – Anna Malmfrid, b. Florvåg, Askøy 26 June 1919, and Gunnvor, b. Florvåg, Askøy 29 August 1922, d. 29 January 1966.
Ivar and Gudrid were, by the way, married at Johannes Church, Bergen on 30 May 1918. 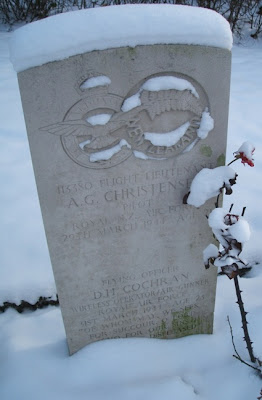 (17) Next to the grave of H. Espelid I found the memorial for Flight Lt. A.G. Christensen (Royal N.Z. Air Force), yet another officer who was executed after the Great Escape. The Scandinavian-sounding name got me interested to do some research on him as well. His complete name was Arnold George Christensen, cf. Births, Deaths & Marriages Online (New Zealand), registration number 1945/35956. According to the website World War 2 Plus 55 Christensen was born at Hastings, Hawkes Bay, New Zealand on 18 April 1922 as the son of Danish immigrant hotel owners. He was executed at Flensburg on 29 March 1944 together with Espelid.
For some reason Christensen was buried together with Flying Officer (RAF) Dennis H. Cochran, who was executed at Karlsruhe on 31 March 1944, only 25 years old.
Among the sources used for this article
See also Part II, Part III and Part IV.